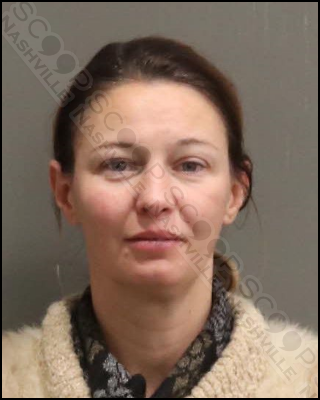 In the early hours of Sunday morning, police responded to a single-vehicle crash at Shelby Ave & S. 11th Street and located the driver, 40-year-old Katherine Eller, who had struck a tree. Eller told officers she was looking at her cell phone at the time of impact. She stated she had “split a bottle of wine” with a friend three hours prior to driving. She performed poorly on field sobriety tests and was unable to provide proof of insurance. She was transported to jail and initially blew a 0.163% BAC on a breathalyzer.

Katherine Eller of Morton Ave in Nashville, TN, was booked into the Metro Nashville Jail on January 15th, charged with driving under the influence, implied consent violation, and no proof of insurance. A judicial commissioner her bond at $2,500.