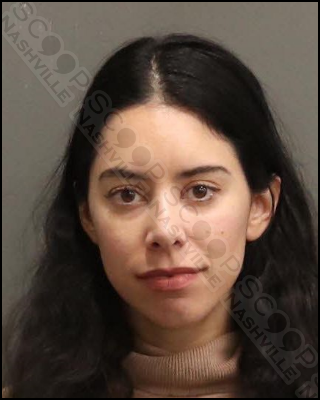 In November, 32-year-old Nossi Adriana Lamb arrived at the home of her ex-boyfriend, Andrew Muller, with movers to gather some of her belonging. At some point during the morning, he discovered Nossi and the movers in the basement where he keeps his recording equipment and told them to leave the basement as they had no business down there. After they left, he discovered a printer and external hard drives had been stolen. He provided the police with receipts for the items. A conversation with Nossi’s father revealed she had taken the hard drives, and he claimed they would be returned after her “intellectual property” was removed from the drives. After she never returned the drives, a warrant was issued for her arrest.

Nossi Adrianna Lamb was booked into the Metro Nashville Jail on December 16, charged with theft. She is scheduled to appear in court on January 23 for a settlement hearing.