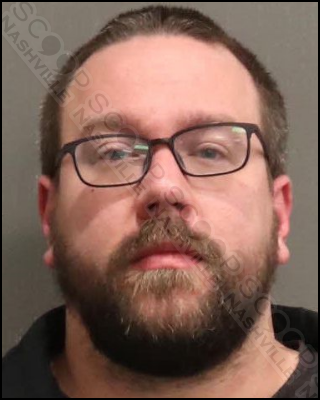 32-year-old Mark Northrup was reportedly making a woman uncomfortable at Honky Tonk Central on Broadway in downtown Nashville early Sunday morning. She alerted a security guard, who asked Northrup to leave the bar. The bouncer, Mark Thomas, says Northrup chest-bumped him before he escorted him to the door. Near the exit, Northup fell to the floor and grabbed the bouncer’s leg. Police were nearby and observed Northrup to be heavily intoxicated. He was charged with assault and public intoxication.

Mark Northrup of Quail Run Way in Spring Hill, TN, was booked into the Metro Nashville Jail on January 22, charged with assault and public intoxication. A judicial commissioner set his bond at $1,100.