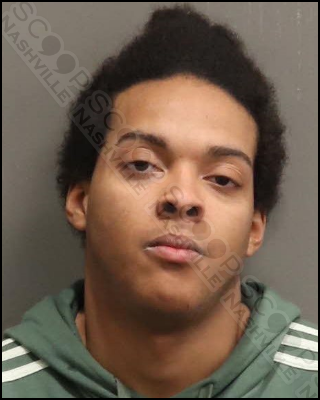 James Shardale Taylor says his lover, 23-year-old Troy Smith, tossed a duffle bag containing his cell phone off of the 5th-floor balcony of their West End hotel late Saturday evening. The two had been arguing as Troy wanted to visit a shopping mall, and James did not want to go. Troy reportedly became “erratic,” causing James to record the interaction. When James said he wanted to level the hotel room, he says Troy told him he would have to fight him to leave the room. He then reportedly snatched the phone away from James and attacked him, strangling him and leaving him with visible injuries to his neck. Troy also poured a beer onto James, leaving him with a wet spot on his shirt. Police arrived and took Troy into custody. The cell phone was retrieved and was damaged as a result of the fall.

Troy Smith was booked into the Metro Nashville Jail on January 7, charged with false imprisonment, domestic assault, and vandalism. A judicial commissioner set his bond at $3,500.